James, my son, got married. In Ireland. In November. And the Walligans were there. We had 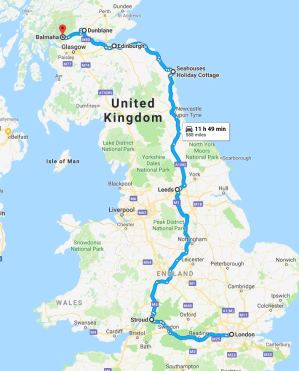 been planning this trip for quite a few months. This is our UK and Ireland trip blog.

Well, if we are going to travel to the UK we better make the most of it! We planned to spend over 3 weeks travelling and exploring parts of the UK and Ireland and doing some work at the same time. The places we were planning to stop were carefully chosen. They were a mixture between some work locations, scenic tourist towns and villages and simply places where old friends lived and where we would catch up. Our journey took in, London Paddington, Stroud, Stratford Upon Avon, Leeds, York, Seahouses Northumbria, Edinburgh, Dunblane, Balmaha Loch Lomond, Carrickfergus, Belfast, Downpatrick, Cabra, Castlederg, Fivemiletown, and Peterborough. For accommodation we booked hotels, Airbnb, bed and breakfast and a castle. We also stayed with some friends. I like taking pictures so some of the drive by’s were for the purposes of capturing a picture of a classic image or just because I thought the location would be picturesque. I  was right about half the time.

It has long been said that part of the joy of travelling is the travel itself, unless that travel involves a long distance flight in cattle class. To avoid the joy of 24 hours of no sleep in seated position with our knees being crushed by a big bloke in the seat in front on full recline we booked Qantas Economy Plus, and what a joy it was. Economy Plus was affordably more than full economy and appeared to be an, ever so slightly, lesser service than Business Class. The food was fantastic served on proper plates with proper metal cutlery. The seats were comfortable and spacious and reclined a good way back. The headphones came with noise cancelling built in and the drinks were excellent quality and copious. As a result we arrived in London at 6:30am fatter and rested. The big trip had begun.

So much for the meticulous planning, forgot to advance book the Heathrow Express didn’t I? It is usually more expensive buying on board on the day but because of the generosity of the guard we got the tickets for the same price as buying in advance. Still, it was £27 each, for a 15 minute journey. Outrageous when you think of it. The next step did not go so well either. When we got to Paddington, because I had meticulously researched this, I knew it was 7 mins walk to the Westbourne Hotel in Hyde Park but, I did not remember the direction. Google maps was no use as I’d blocked mobile data roaming. In the end we bought a map for £1.95 in W.H. Smiths in Paddington and we were on our way. The hotel was beautiful and we got an early check in. Jenni had a business meeting that afternoon and I’d arranged to meet an old friend Del Jacobs, so after a doze and a shower we both got dressed and and caught a taxi. Jennie was going to join us after her meeting and I’d asked Del for a suggestion for a venue, I’d asked for it to be a place with a bit of history, his response was immediate, Ye Old Mitre in Ely Place.

Opened in 1546 it s a pub with no little history. Henry VIII was married in St.Ethelredas next door and his daughter, Queen Elizabeth, is said to have danced around the cherry tree at the door of the  pub with Sir Christopher Hatton. As it is a real ale bar I ordered a Seafarers, I liked the label,  and waited for Del to arrive. Del is an old friend, we met about 17 years ago but hadn’t seen each other face to face for nearly 10 years as is the way of such things. Del arrived about halfway down the first pint, just in time to order another. It was like the last 10 years hadn’t happened as we fell into comfortable conversation immediately the way good friends do.

Jenni joined us and I introduced her to Del. They hit it off immediately and we had such a grand chat till Del had to head home. We walked back to the hotel along Oxford Street. Although Christmas shopping hadn’t really got started it was still amazingly busy and quite pretty decked out in the Christmas lights. Stopped at the O2 shop in Oxford Street and bought a wifi mobile broadband hotspot. This was to enable us to keep in touch with the office and work while we drove around. It worked like a treat and helped prove to ourselves that maintaining a job while travelling was possible.

We ate in a small wine bar in Paddington, can’t remember the name of the place, the food wasn’t memorable either. After a pleasant nights sleep in the Westbourne we had a hearty breakfast in a small Italian restaurant called Il Gusto then back to the hotel to check out. After checking out we dragged our cases to Paddington Station and waited in the bar in the station for our train to Stroud to meet Ian and Shelley, two of Jenni’s friends.

Stroud is a lovely little market town. From Wikipedia-

Situated below the western escarpment of the Cotswold Hills at the meeting point of the Five Valleys, the town is noted for its steep streets, independent spirit and cafe culture. The Cotswold Area of Outstanding Natural Beauty surrounds the town, and the Cotswold Way path passes by it to the west.

I knew nothing about Stroud except I was getting it mixed up with Slough in my head. It isn’t like Slough, it’s as beautiful as Slough isn’t. A superbly kept small town at the foot of the Cotswolds. Ian and Shelley met us at the station and almost as soon as I set my suitcase on the floor Ian offered me a bottle of exquisite craft beer then proceeded to inform me about all the independent craft breweries withing 10 miles of Stroud and how we were going to try a few of their brews. I knew from that moment we were going to get on well.

Once settled we embarked into Stroud town centre. Ian took us (me) to a little boutique craft beer bar with 20 beers on tap, all in bags sitting on the counter. This meant they were all warm and uncarbonated. For the lager drinkers reading this, stop making that face. They were delicious. There were a few chilled drinks and I had one, the Twisted Thistle Cider from Scotland which make a reappearance later in our tour. After the beers we had a superb Indian meal followed by a dance and more drinks at a nightclub. 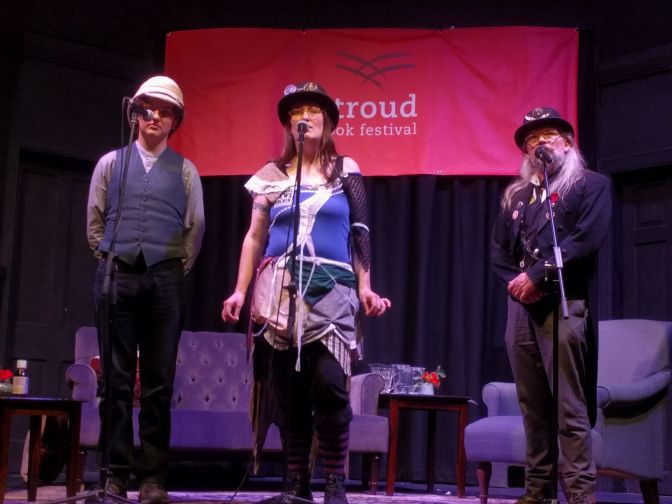 It was Stroud Book Festival and Ian and Shelley had arranged tickets to a reading by Nimue Brown and Tom Brown, author and artists of the steampunk graphic novel series Hopeless, Maine. I’d not heard of this series. The recitalists were very entertaining and the books sounded interesting. Read more about them in their blog here.

The following day the Walligans were taken on a tour of the Cotswolds. It certainly is an area of outstanding natural beauty. We went to a little village called The Slaughters and had Sunday lunch at the The Slaughters Inn. From Wikipedia-

Upper and Lower Slaughter share a fascinating name, which derives from ‘miry place’. The link is the tiny River Eye, tributary to the nearby river Windrush. Lower Slaughter is just off the Fosse Way and very conservation-minded, a wander alongside the stream seems like a privilege. People actually live here! The villages are considered to be one of the prettiest in the area and are well photographed and the village has been used for filming and productions.

After lunch we had a little explore around the village. It is very picturesque and well kept. Not surprised it is pictured a lot, I took about a hundred pictures of the place.

Shelley does conservation work and back in Stroud took us to the canal that had fallen into disrepair and been restored by volunteers from the conservation group. We took a walk along the restored canal. It was, of course, very beautiful. 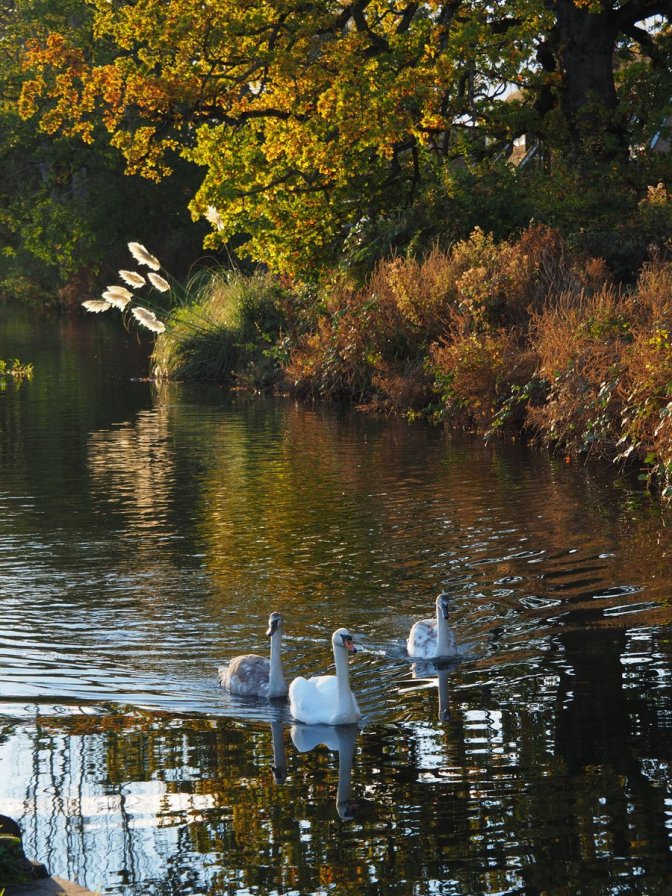 Next we hiked up to the top of the hill overlooking Stroud to catch the sunset. As we ascended the hill we saw hang gliders in their dozens circling the sky, the same sky that was staring to turn from blue to orange quite cooperatively.

Halfway up we stopped to admire the view, actually it was to give me a rest I think. 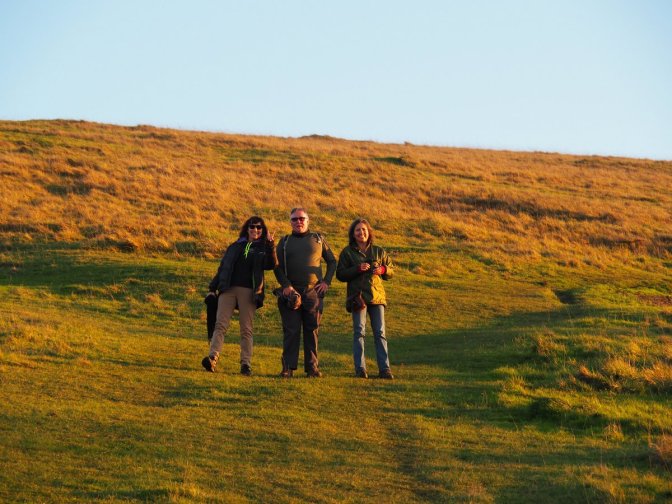 The view from the top of the hill was stunning, made even more beautiful by the glowing sunset and the hang gliders over Stroud. 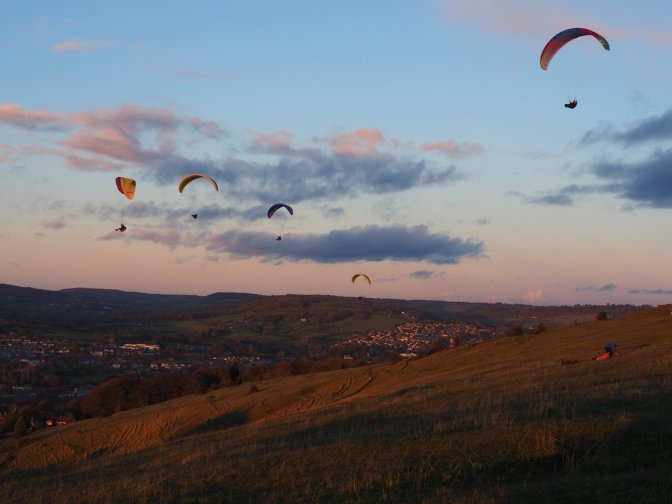 At the peak we ate fruitcake brought thoughtfully by Shelley and watched the sun setting over beautiful Stroud. 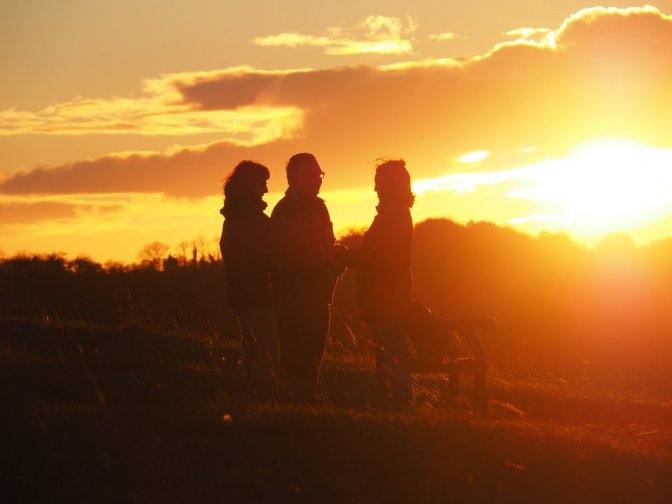 The start of our UK tour was looking promising, if the rest of the trip was as good as this we were going to have a great time. It was and we did.

The next day we picked up our hire car and set off for Oop North, Leeds here we come!