Around 10,000 years ago the ice from the last glacial period began to melt and the seas rose around Australia annexing Kangaroo Island from the mainland. For the last 16,000 years the local indigenous aboriginal folk lived on the island. Their ancestral stories passed down through generations tell of the great flood that created the island 10,000 years ago. They truly are a remarkable people.

The Kangaroo Island Ferry takes about 45 minutes to transport you there. We had planned to be on the island for 3 nights and 4 days. The decision to visit the island was a spur of the moment one, we had 4 days unallocated in our itinerary and took to Google Maps one night to see what was interesting around Adelaide that we could visit. “Oh look, there’s an island!” said Jenni while scrolling around the map and within 30 minutes we’d booked our trip there.

The ferry was fully booked apart from the first sailing at 8am. The trip to the ferry was 2 hours from where we were staying in Adelaide so we decided to stay somewhere in the Fleurieu Peninsula near the ferry port at Cape Jervis the night before the crossing. We stayed at Winnera Cove Golf Resort just 20 minutes from the port. Probably won’t stay there again. It was a soulless, empty place. The staff were nice and tried hard but you can’t make a donkey dance. However the Fleurieu Peninsula is stunningly beautiful, We were rewarded by seeing tame kangaroos grazing outside our room when we left for the ferry in the morning.

This massive cloud bank sat ominously over Kangaroo Island as we drove to the ferry.

We needn’t have worried, the crossing was calm and the sky soon cleared. On the ferry I was listening intently to a conversation happening between an older couple and a young fella beside me. He worked on the Island and was imparting his experiences to the older couple as to where to visit. He mentioned 2 places, Remarkable Rocks and Stokes Bay and now they were on our list also.

We were staying in a small hotel in American River and were too early to check in but the friendly lady servicing the room gave us a tip for somewhere to have lunch, the Frog and Roses cafe.

It was a great recommendation, the place was quirky and interesting.

The cafe was in the Ugly Dog Transport business park and was also a garden centre and florist. Most of what they cooked came from their garden. They specialised in pizza, we saw them making the dough when we walked in. So we ordered pizza and it was delicious.

After our hearty lunch we went to Kingscote. This seal was sleeping in the water near the beach for the whole time we were there. I didn’t know seals slept in the water, nor that they raised one fin while doing it until I read it on a plaque on the esplanade. I guess it’s the same as putting one leg out from under the covers in bed when you are too warm.

A bit farther along the esplanade we came to the sea water tidal pool. There were people fishing off the pool wall out into the bay.

I just loved this warning sign at the pool.

I can just imagine a bunch of kids swimming in the pool and some fisherman reeling in a small shark and throwing it into the pool to watch the panic. Personally, I’d watch that on YouTube.

I gave Jenni the camera while we walked along a narrow path along the coastline. She took this stunning picture of the coastline.

And this not so beautiful one, 180 degrees around and seconds later.

On the way back we were lucky to spot one of the famous Kangaroo Island Levitating Pelicans. They float just above the surface of the still water making sure they don’t disturb it and wait for fish to swim by. 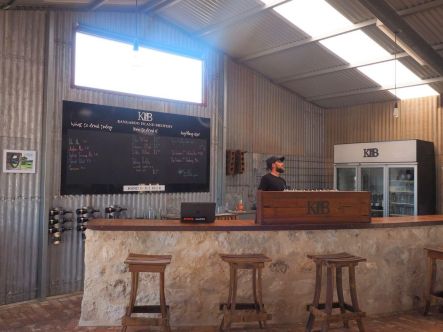 On the way back to the hotel we passed the Kangaroo Island Brewery, well actually we didn’t pass it. We stopped and had a brew and it was great. The view out the back of the brewery went to the horizon. The brewery hasn’t been open long and makes all it’s beer using renewable solar energy and rainwater it collects from the roof. The beer tasted great, I hope it does well, it’s a great venture.

The morning view was just as beautiful.

All we knew about Stokes Bay was a name. The next day Google maps took us there and we had no idea what to expect. We had to work that day so we parked in the near empty car park, walked past the closed cafe and set up our laptops and wifi hotspot in the BBQ area overlooking the rocks. 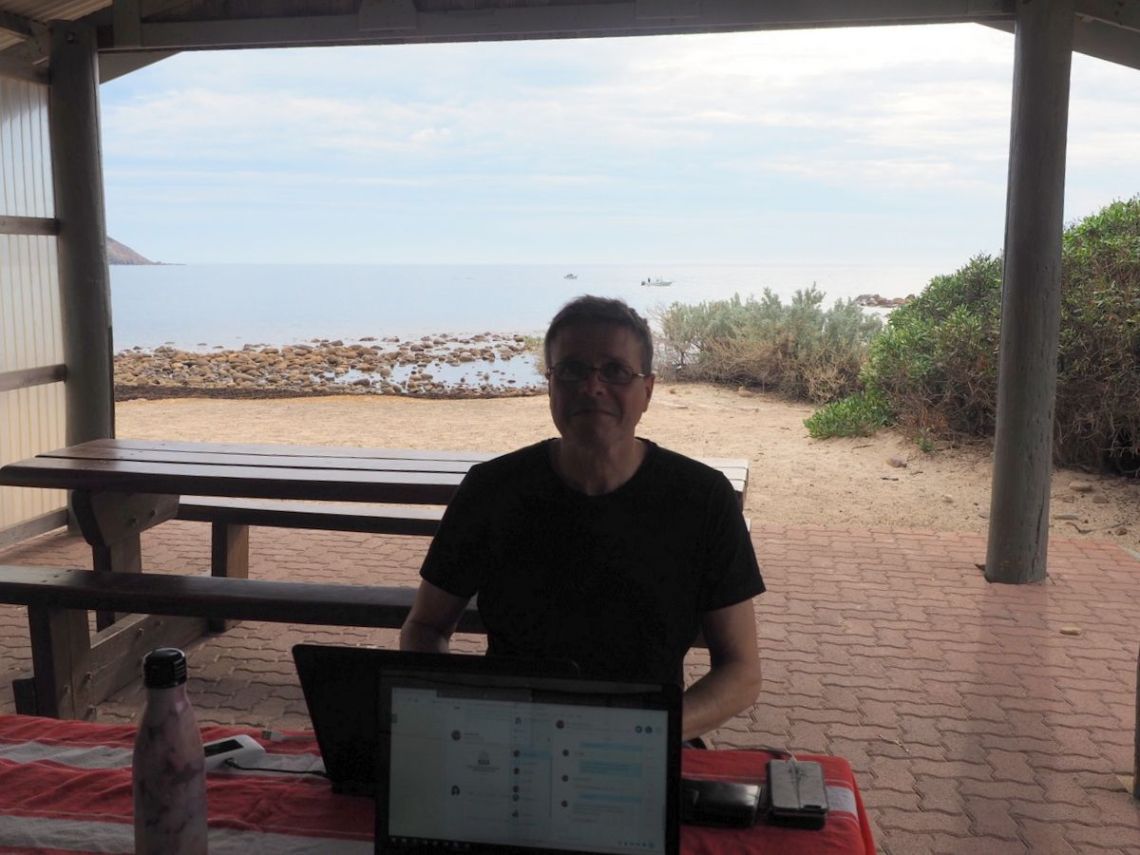 On first glance there was no beach and it was distinctly underwhelming, I wondered what all the fuss was about. That was until I read this poster on the wall of the BBQ area right beside me. Then looking around I saw this sign in the distance on a rock with an arrow to the beach.

After we worked for a while then cooked up our lunch in the BBQ area we went to find the beach. It was a tremendous surprise.

The pathway though the boulders was like going into another world, squeezing through the last narrow gap we emerged into a pristine white sand beach complete with clear blue sea and calm lagoon.

Stokes Bay was certainly worth the travel and exploration.

On the beach we saw a pair of “Hoodies”, Hooded Plovers. All over the island we saw posters saying there were only 22 breeding pairs in this part of Australia. These two didn’t look particularly loving but they did fly off together so maybe they were a couple.

That night we ate in the hotel. In the bar we met a couple of locals, Maureen and Greg, who had lived on the Island for quite a few years. Maureen had traced her ancestry back to Ireland so we had a connection, but she also grew up in Beenleigh. Jenni grew up in Beenleigh. The conversation went wild after that sharing stories and anecdotes. Greg and Maureen spent years travelling round Australia, Greg was a mechanical engineer. His finest hour was when he was chief engineer on the Brisbane Expo in 1988. He told me he was the first person on the site and the last off it. Not a bad CV. We’ve been offered a room if and when we return in Maureen and Greg’s place. The residents of the Island are very friendly. We vowed to meet some more next time.

Earlier the same day the owner of the hotel was chatting to us at breakfast. We got around to the inevitable, “What are your plans?” question and we said Stokes Bay, she nodded, Remarkable Rocks, she nodded and Seal Bay, she didn’t nod. She said there are seals at the Remarkable Rocks, save yourself a journey and some money and just go see them there. The proscribed best itinerary was to go to the Flinders Chase National Park and see the Admirals Arch first, see the seals that were the and the lighthouse and then go to the Remarkable Rocks and call into Hanson Bay on your way back. Never one to turn down good advice and a suggestion of the most efficient route we did exactly that. But not quite, almost. We saw them all but not in that order.

The Flinders Chase National Park, where the Remarkable Rocks are, were 2 hours drive away at the other end of the Island from where we were. It was Anzac Day so we had a bit of a break from work and could take the day to go there. It also was home to Admirals Arch, a seal colony and the Cape Du Couedic Lighthouse. I must mention Kangaroo Island was quiet. We saw maybe 10 cars on the drive to the Rocks.

Cape Du Couedic Lighthouse is a particularly pretty lighthouse that I obviously thought would look prettier with me sitting in front of it.

We parked in the Lighthouse car park and walked down to the Admirals Arch. The walk takes you through low, thick scrub.

The cleared pathway has signs every few metres giving you information of the flora of the area and how hostile the environment is and how harsh the weather is and how hardy the plants are to survive and thrive there.

The walk from the lighthouse to the Admiral’s Arch is about 1km. A short detour takes you to the specially built seal colony viewing platform. The seals put on a good show for us by lying motionless, brown seals on brown rocks below neither things moving. Riveting. We left the Seal Colony Viewing Platform and walked to Admirals Arch. The sign at the arch said this is the last stage in the process of making an island through wave erosion. At some time in the future the arch will collapse and everything on the other end of it will be a new island.

Thankfully, like the seals, the arch wasn’t moving either. Good job as we had to walk over the top of it to get to this platform.

We saw a lot of tourists on this part of our trip. You will notice this picture above has no people in it. I was lucky and waited a while for the right moment to take this pic without people. But people in a picture adds perspective so here it is with the tourists.

Now the seals can’t read. So they didn’t know they should sit or perform in line of sight of the Specially Built Seal Viewing Platform and so they went to another place to perform and show off, like the rocks around Admirals Arch.

They were very cute, well worth the trip.

Next stop the poster child of the National Park, the Remarkable Rocks

These rocks are huge. Strangely shaped and just sitting on top of a smooth rocky outcrop like they were taken away, carved and put back as a display. As you can see from the pic at the top of the page the rocks had quite a few visitors this day. I waited until they all disappeared behind the rocks to take this picture.

They are so big they need a person in the pic to give them perspective. Here’s a short person standing in front of them to make them look even grander. 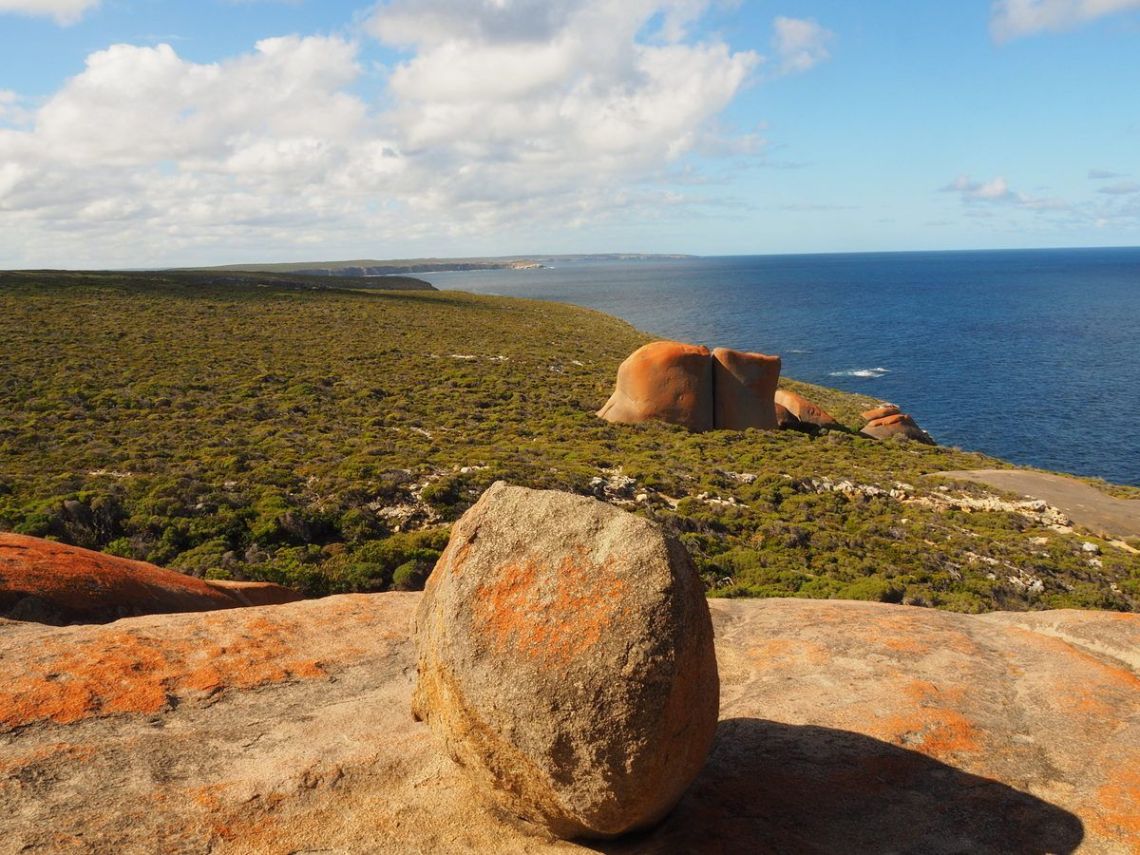 The view from the point was pretty nice too.

On the road back to the hotel we passed the sign to Hanson Bay. It was only a short drive and as we’d been informed it was worth a visit. We turned off the main road to see what it was like. We were not dissappointed.

This beach must be one of the most pristine, beautiful beaches in the world. Unspoilt and breathtaking.

This signified the end of this part of the adventure. The next day we were leaving the island. We drove back to the hotel with a head full of memories. Kangaroo Island is beautiful and we only scratched the surface of it’s delights. We will be back for certain.

For the next two nights we stayed with Jenni’s family friends in Semaphore in Adelaide. Then we left for Castlemaine and our next work assignment. On the way we decided to stop in Sea Lake, a small town near Lake Tyrell, the largest salt lake in Australia. At his time of the year it is dry, and salty. It was formed when the seas were higher then retreated leaving a lot of water behind. 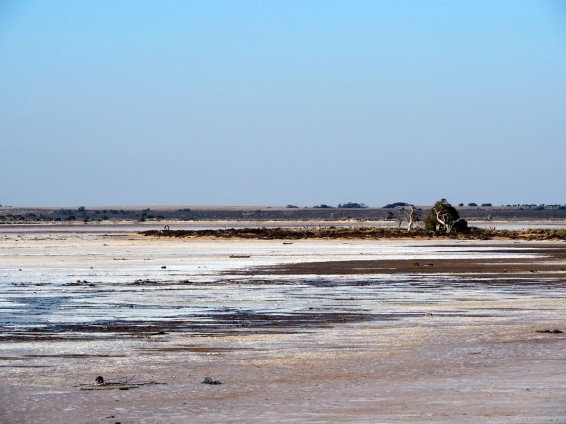 From Sea Lake we go to Castlemaine, another former gold mining town. But that’s for next weeks blog.