To celebrate I washed the Mazda, first time since we left, and boy did she need it. The dust from the roads gets everywhere. Took me 2 hours but she looks great now, although I must admit that having a heavy coating of road dust gives the car some character, like, “Ask me where I got this?” sort of character.

This week we are in Adelaide, surrounded by wineries. Adelaide Hills, Barossa Valley, McClaren Vale, Clare Valley, all regions that are familiar to wine drinkers. They are all around us but we haven’t had time to explore and experience any yet. We have planned to go see some of them over the next couple of weekends. We have, however, seen a few breweries and a couple of cideries, more on that shortly.

We’re house sitting for 2 weeks for a couple who are off to Africa on Safari, we’re looking after their dog and 2 cats. Before they left they told us to look out for some Australian wildlife, a friendly Koala that comes into their garden on occasion. It sleeps in their tree and occasionally comes down to say hi and get patted. It hasn’t visited yet but amazingly we did spot one in the wild, which if you read any of my previous blogs, is something I’ve been very keen to experience.

This weekend it was my birthday and as a treat, and because I like good beer and cider, Jenni gave me the best present ever. She drove me around some of the local brew houses and cideries. The picture above of one of the wineries was taken on our way to the first pub, the Uraidla Hotel, also sarcastically known as The Worst Pub in Uraidla. On the way to the pub Eagle Eye’d Jenni spotted a koala high in a tree at the side of the road. I was driving at that point and didn’t see it so risking life and limb I did a u-turn and pulled up onto the footpath and stopped near the tree Jenni pointed out. And there he was, just lying there sleeping in the warm sun. I snapped off about a thousand pics before leaving. HE didn’t move the whole time so they all look like this.

Now we’ve “broken the duck” we, hopefully, will see lots more. Maybe the Koala will pose a bit differently next time. I was very, very excited though and was a great start to birthday weekend.

The Uraidla Hotel was recommended to us by Barry and Josie, whose house and pets we are looking after.

The immediate challenge in the Uraidla Hotel happened when going to the toilet, a decision as to whether I am a Producer or a Fertiliser? Once resolved, and inside the Fertilisers establishment I discovered a very unique use for old beer kegs.

I’m glad there was no one around when I got there as I wanted, immediately, to take this picture. I would certainly have felt a little odd standing with a camera in my hand for someone to finish up their activities and leave.

Fully refreshed and back at the bar we checked out the menu. We had planned a snack in each pub so ordered the popcorn cauliflower but were dithering over many options that sounded exciting and interesting. It came served in a flowerpot and was delicious. I had a Barossa Apple Cider to start, which was very appley and very, very dry.

I then had a Session Ale from the Uraidla Brewery which is right next door. It was a decent light ale, great to drink on a warm day.

Sidewood Wines in Verdun was our next destination. As well as making some good wines they make apple and pear ciders which have also had some good reviews.

Unfortunately there was a massive wedding on when we got there, the place was packed and the staff distracted so we didn’t stay and instead drove away without trying anything.

Hahndorf was a revelation. It’s an attractive little town keeping much of it’s original German heritage.

Its history page tells us that on the 28th of December 1838 the good ship Zebra carrying 187 German Lutheran immigrants (38 families) arrived in Port Adelaide. The ships Danish captain Dirk Hahn, had grown to respect the passengers and promised to help them achieve their goal of settling and farming together. He was able to negotiate a parcel of land in the Adelaide Hills and so Hahndorf was founded. 14 other families from a neighbouring village joined them to make 52 families in total.

The names of the 52 pioneer families are inscribed on the gates of the Pioneer Memorial gardens in this new settlement was called Hahn’s village, Hahndorf, in honour of Captain Hahn. Captain Dirk of the Hahndorf enterprise as it may  be interpreted.

Gulf Brewery is on the main street in Hahndorf and sells all it’s own brews. I had a tasting paddle of 3 beers and 1 cider. I liked the Amber Ale best, but the Smoked Dark Ale was very interesting. It tasted just like smoked bacon! I didn’t try it but I did wonder if their Fish Tail Ale tasted of fish? We bought some bottles to take home and went to explore Hahndorf a bit before heading to our next and last place.

As we walked we heard some excellent live music being played and drifted towards the sound. It was coming from the Hersey Vineyard Cellar Door so we had to drop in and see what was going on. Out the back, in the small courtyard, two experienced gentlemen were playing funky jazz and blues on guitar and keyboards. A lady joined in singing occasionally. It was very charming and very relaxed.

The Hersey Vineyard was planted by the first qualified female winemaker in Australia in the early 1990s and was one of the first biodynamic vineyards in South Australia. The vineyard was abandoned for many years until purchased by the Hersey family in 2012.

We each had a glass of Hersey’s super light red summer wine. It was a perfect choice for this perfect day. We ended up buying 3 bottles to take home, 2 for friends and family and one to keep and drink ourselves. Next and last stop, the Prancing Pony Brewery in Totness. 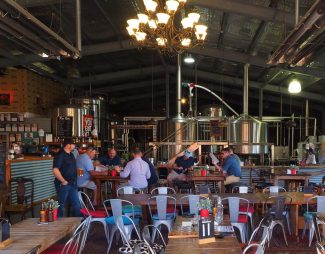 Prancing Pony beers are in every bottle shop and pub I’ve been in around here so I expected a big place and was not disappointed. The warehouse, brew house, is massive. I ordered the tasting paddle of 6 beers and a pizza.

The beer menu was extensive, I liked their Amber Ale also and the  India Red Ale so bought a mixed six pack before leaving.

We paused to explore Port Adelaide on our way to meet some of Jenni’s family friends for dinner.

Everybody takes the pic of the lighthouse this way, I tried to be artistic and take one that way above. I liked the clouds and the sky.

Port Adelaide is a fantastic old Australian heritage town, full of interesting buildings and architecture and some interesting murals. 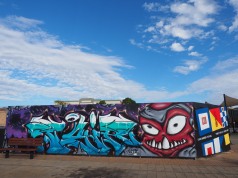 Yelta is the last steam driven tug in Australia. It was built at the Cockatoo Island Dockyard in Sydney, New South Wales, during 1948.

The Dockside Tavern frontage was much improved by placing a well dressed Irishman in a recently ironed shirt and with a brand new haircut in front of it.

There were a few interesting old buildings and ships and things to see in Port Adelaide before we stopped for drinks at the Railway Hotel.

Jenni’s midichlorians were firing again and she pointed to the Railway Hotel. Souzi D Wilson and the Cool Mints were playing. The bar coincidentally served Berossa Cider so I had a couple more of those. Souzi D and her band were cool and laid down some danceable tunes so Jenni and I hit the dance floor to show the band our appreciation. Jenni is a beautiful and well trained dancer, her body flows like a river, she has the grace of a gazelle and the rhythm  of a catholic. However, I have almost, but not quite, the exact opposite of that grace. Remember Men In Black, where the alien  crash-lands on Earth and kills a farmer named Edgar and uses his skin as a disguise. Remember how he walked. Well. that’s pretty much my dance moves.

These guys were however, pretty cool. Good enough to grace a stage at any Blues festival. The bar was interesting in itself. 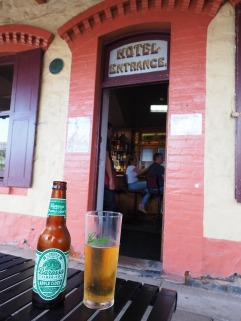 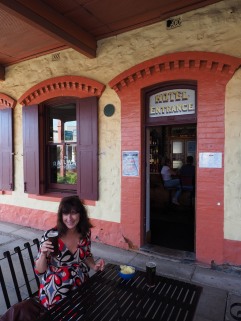 This sign was on the wall, I am now googling for this product.

For “Infantile Liver and Spleen Complaint.” Sounds like a thing I need.

We left Port Adelaide and drove to the Grange Jetty to meet Peter and Kathy. On the way from where we parked the car we read this on the wall.

I love a little arboreal philosophy. Seems to be a derivation of the Mad Farmer Poems by Wendell Berry.

When I rise up
let me rise up joyful
like a bird.

When I fall
let me fall without regret
like a leaf.

The Grange Jetty is nice. Jenni and I took a walk along it before dinner. There were fishermen and tourists, oh and a couple of seals came to say hello. Wild Koala’s and Wild Seals on the same weekend is pretty amazing.

Seals at the Grange Jetty

Seals at the Grange Jetty

The light changed for about 60 seconds and lit the beach with the most amazing golden sunset glow. 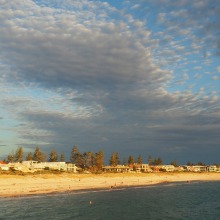 The Grange was named after Captain Charles Napier Sturt’s cottage. He’s an English explorer and there’s lots of streets and roads named Sturt around the place but he’s not interesting enough for me to say much more about him in this blog at this time. He’s had enough publicity without me adding to it. His cottage must have been pretty interesting though to have a town named after it don’t you think? Maybe some would say more interesting that Charles Napier Sturt himself. Some would, I probably wouldn’t.

Sunsets over the Grange Jetty are sometimes very photogenic. Many photographers gather each night trying to capture that perfect moment.

Tonight was not that night.  Sometimes Gaia isn’t playing and doesn’t want to put on a show and the sunset looks like this.

I did get a half decent view myself before the sun set for the day.

We’ve not even scratched the surface of the many delights Adelaide and it’s surrounding districts have to offer us. Over the next 2 weekends we’ll explore a bit more and let you know all about it here.