Before I continue on this next part of the blog I must warn you that there’s a bit of drama and tension at the beginning and in order to ensure the emotionally weaker of the readers don’t get too anxious, we did make the ferry to Ireland at 11:30.

Having left the bonny (x2) banks of Loch Lomond we had a deadline of 11:30 to catch a ferry to Northern Ireland. We also had to return the beloved Toyota, nice car to drive but a bit needy, and collect our tickets for the ferry, check in, board etc. We had 30 minutes extra travel time built into the journey to compensate for the extra traffic through Glasgow that we anticipated due to the time we would be traversing this city. We didn’t, however, anticipate the big truck on the single track road with no room to pass all the way from Balmaha to Glasgow going at the speed of a pensioner through Ikea on a Sunday afternoon. Officially recorded as the slowest speed a human being can be moving and still be recorded as moving.

We lost 40 mins on the road to Glasgow and then, surprisingly, sped through the city, (minor detour excluded due to a breakdown in the Jim – Sat Nav interface, another 5 minutes lost) and we’re on track to make the ferry at 11:30, just. There was another ferry 4 hours later but it would have played havoc with our itinerary. This is one of the parts of travel planning that make sense to over plan. Then there were road works, and a requirement for a toilet stop not anticipated. We finally got to the terminal 10 mins before the ferry was due to depart. Inevitably the Hertz hire car return peeps asked for the paperwork we were given days before, which of course I had no immediate recollection of their location. Located said paperwork in the glove box (5 minutes to departure), to save time and while the hire car squad were making sure I didn’t randomly steal a car with the same registration number, colour etc and try and pass it off as one of theirs, Jenni went to collect the tickets only to return with the information that only the person travelling could check in. (2 minutes to departure). The lady from Hertz, while her colleague was typing on the computer, started engaging in small talk, “Did you have a nice holiday?” “How was Scotland?” which the typing colleague thought it useful to join in on. In the background the ferry made a loud noise, like “I’m about to leave” noise. (1 minute to departure) just at the time the chatty lady handed me my hire car docs. With a hurried thanks I grabbed the docs and we sprinted to the ticket desk expecting it would be empty but the kindly gent spent some time looking up our booking on his computer (time’s up, it’s 11:30, in the background a loud horn makes a departure sound again). He eventually found our booking and printed out our boarding cards but told us to hurry as the boat was about to leave. (Really!!)

We sprinted to the departure lounge dragging our suitcases with us to find it empty. (3 minutes after departure time) We ran towards a sign that indicated this is the door you go through to get on a ferry. Through the windows we saw the ferry close its doors after the last car rolled on board. We heard the engines fire up while men in hi-viz vests busied themselves undoing the ropes holding the ferry to the shore. We found ourselves in a second departure lounge, baggage check in. And there were official looking people there who want us to check in our bags. It’s now 5 minutes past the time the ferry was due to leave and it is making a lot of “I’ve already gone” sounds on its horn and its engines. Expecting the baggage people to say, sorry you’re too late, you’ll have to wait for the next one they said instead, “Put your bags on here and go up the ramp and have a nice journey”. Which we did and we did and we did. Northern Ireland here we come.

I’ve been on this same crossing many times and it is usually like a ride in a theme park, the ones where you have to be above this height to go on. But this time the sea was calm as a pond and the consequently the cruise across was very relaxing. We were collected at the Belfast ferry terminal and driven to Carrickfergus where we were due to stay two nights. I was brought up in Carrick as its colloquially known and have family there we intended to visit. Jenni had not been there before so I was planning to play local tour guide while we were there. The first night was spent catching up with family and the next morning Jenni and I went exploring. The Premier Inn we were staying in was right beside the harbour and the castle, and we had a great view of both from the hotel breakfast room.

We dressed in some warm clothes and set out, first stop the Castle. built in 1177 by the Normans it is still in remarkably good condition. It has survived sieges by the Irish, Scots, English, Normans, the Americans and the French.

We walked along the shore to Fishermans Quay and then back along Scotch Quarter and back to the hotel to get warm. It was bitterly cold that day. Carrickfergus is an old town and there’s a lot of historical relics left around the small town centre such as the Irish Gate, old city walls and a couple of old pubs, one of which we’d be visiting later.

The space between the Scotch Quarter and the shore road has been used to create a great space called Marine Gardens. It boasts a kids playground and a WW2 tank, just in case those pesky Normans ever come back I assume.

We would be returning later and would pick up more of the sights then.

The following day we made our way to the old town of Downpatrick where I have more family and the son who was getting married is there and it is he who we were visiting. Remember the wedding, the whole reason for the trip? Go back to blog one for a catch up. We checked into our hotel, the old coaching inn Denvir’s. Established in 1642, from their web site.

As the oldest surviving coaching inn in Ireland Denvir’s was the starting point in 1809 for the first passenger coach service between Downpatrick and Belfast. Fares on the coach, the ‘St Patrick’ were eleven shillings, four pence and a ha’penny (57p) for an inside seat and seven shillings and seven pence (38p) for an outside one. 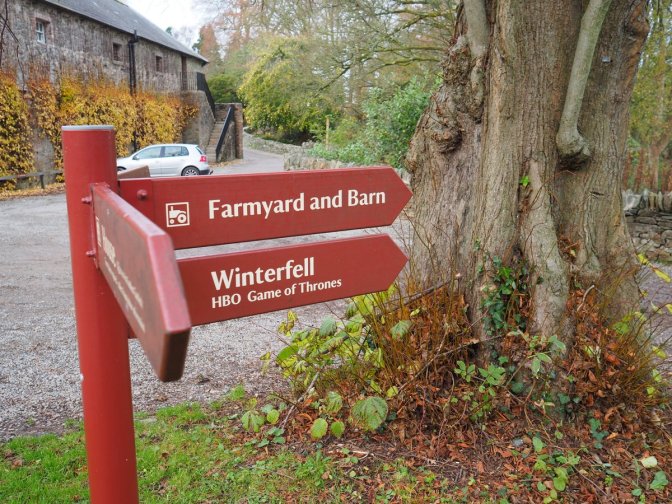 We brought Becky with us and collected James and went for an explore around the local beauty spot called Castle Ward on the banks of Strangford Lough. I wasn’t aware at the time but Castle Ward was used as the location of Winterfell in Game of Thrones. 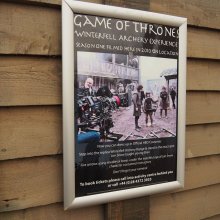 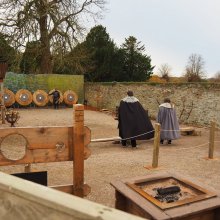 It quite a beautiful place, worth a visit.

We went to the Lobster Pot in Stangford for lunch and had lobster, strangely enough, and extremely good it was too. Then had a pint of Hodoor beer across the road in the Cuan where they have one of the Doors of Thrones. This is from their web site.

The Cuan was the cast’s choice for accommodation, food and drink while filming Series 1& 2 at Winterfell Castle (only 1 mile from The Cuan). Ned Stark (Sean Bean), King Robert, Queen Cerssi, Joffrery, Jon Snow, Catalyn, Ayra and Bran Stark made The Cuan their home over a number of weeks.

The story of the Doors of Thrones can be found here.

The next night we went back to Belfast and caught up with a a few old work colleagues then it was off to Cabra Castle for the wedding.

I didn’t take many pictures of the castle, none worth showing and one better than their web site here.

The wedding was a spectacular event, James and Graham looked grand in their suits and the attention to detail was outstanding. Everyone had a fabulous time. I even shed a wee tear.

All three of my kids are in this pic, it’s one of my favourites. 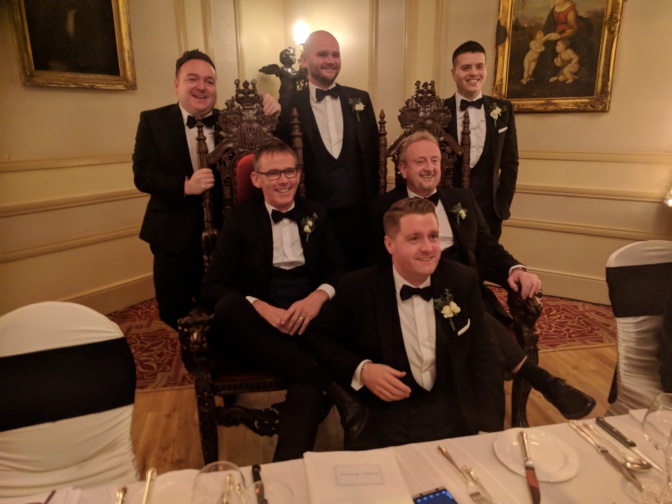 Everything went well all day and we made it to 11:30 before we went to bed. Drink may have been taken.

The morning after the wedding and a hearty breakfast we departed on the Mulligan Trail and a black taxi tour of Belfast. More of that in the next and final blog.