This blog was written several months after the trip. Some of this blog may range from slightly enhanced to wildly exaggerated.

Banksia Cabin, Dolphin Sands, 9 Mile Beach. Our next stop after Panama festival. 2 days of nothing to do and all day to do it. Jenni picked Banksia Cabin from Airbnb.

Banksia Cabin is a secluded place beside a beach, peaceful and quiet but very comfortable. The only complaint, the sound of the waves gently breaking on the shore 10 metres away can be a bit loud sometimes. We walked along almost all of the 9 miles of the beach and I made a soup that turned out pretty good. It was a haven of peace and a great place to recharge  before heading to Hobart to pick up Maddy and start Tassie phase 2.

After Dolphin Sands we swung by the airport  and collected Maddy and checked into Liverpool House in Hobart, a large imposing home on a steep hill overlooking the city. Plenty of room for Jenni, me, Maddy and Becky (who was arriving an a couple of days time)

MONA for all of us was a bit of a dream. It didn’t disappoint, the only regret was we only spent a short part of one day there as there is so much to experience. We had arranged to have lunch in MONA at their renowned The Source restaurant where I discovered Moo Brew dark ale. If you ever get a chance try it.

The food was superb. As is our wont Maddy ordered for us, abalone, never had abalone, didn’t even know if it was fish or fowl, turned out it was fish. A sea snail to be exact. Protected apparently, like swans. Can only be eaten by royalty during the Ides of March or something. After convincing the staff we were royalty by talking down to them, showing them pictures of inbred kids, oppressed servants and piles of cash, all of which we said were ours we were served the abalone. (That last bit, in case you hadn’t guessed, was the wildly exaggerated bit. I’m obviously still doing the talking down to you thing but that will pass I am told.) The abalone was delicious, as was all the food in MONA. In fact MONA was a complete delight from start to finish. When we go back it’s a place we are going to spend a full day exploring.

From the MONA website where they picture some of the works on display:

Please note: these works represent the tip of the proverbial iceberg. Our collection numbers 1900—and counting.

Also, we do not guarantee any of this stuff will be on display at the time of your visit. Most likely when you come you will find a mouldy carrot and David Walsh passed out on the couch.

If you’re annoyed the thing you wanted to see isn’t on display, please do let us know by writing an angry message on our Facebook wall—we love that, and we take heaps of notice of it.

We climbed Mount Wellington. More accurately we drove up Mount Wellington and parked in the car park almost at the top then walked up a slight incline to the top. The views were the same as if we had climbed. Spectacular.

Many years ago on an international flight I was reading the in flight magazine, in there was an article on the top 10 beaches in the world and number 1 was Wineglass Bay in Tasmania. For years I have had a visit to Wineglass Bay on my list of ‘must do’s’ so Maddy, Jenni and I drove to Freycinet, a short distance from Hobart so I could see a beach. What I didn’t appreciate was that to see it and get the famous pic was a hike, We did that, got the pic. But to stand on Wineglass Bay was another hike down a long steep decline which we did. It’s a beautiful beach. Australia has so many beautiful beaches it’s hard to say if it deserves the number 1 spot but it was right up there.  The walk back up to the car took me a little longer than the trip down. While Maddy and Jenni skipped over the rocks and roots on the near vertical path back to the car I panted and wheezed and  dragged my old ass slowly to the top. As I took the last step I bent double, hands on knees and gasped for breath and an elderly couple who had just completed the same climb and still looked fresh as a spearmint tictac nearly pissed themselves laughing at me. Fair play them but it was all worth it. Bucket list item ticked off and it met expectations.

Back again to Hobart and Liverpool House. The family that owned Liverpool House also ran The Old Bank Geeveston. A great little cafe/bistro.  They left us amazing, delicious pastries in the kitchen when we got home most nights. Geeveston was on our way to the Tahune Air Walk we (I) wanted to visit. So we popped in and had lunch. Delicious, if you are in Geeveston, go there. Now, being afraid of heights a tree top walk wasn’t high on Jenni’s list of must do’s. But fair play, she came, saw and conquered.

We dropped Campy off at the airport and picked up a Renault Koleos when collecting Becky. Now we were 4. Team Tassie as we ended up calling ourselves. We booked a boat tour around the tip of Bruny Island. It was the most spectacular event I have experienced in a long while. I’d recommend this trip to anyone. We saw an albatross, dolphins, sealions and a big hole in the rocks that spat at me.

After the trip we did a bit of exploring around Bruny.

My favourite Team Tassie pic taken in Liverpool House.. Becky’s face is a bit blurred but that’s probably for the best.

We said farewell to Maddy and now we were back to 3. Jenni, Becky and I set off for Jacky’s Marsh, an eco retreat in the forest nearer Launceston. On the way we stopped by Bonorong Wildlife Sanctuary. We saw Tasmanian Devils and loads of other indigenous Tasmanian wildlife. It was a very interesting place to visit. I’m sure this sign was for the benefit of the Tasmanian Devils.

The drive to Jacky’s Marsh took us through the Central Highlands and again the scenery was eyewateringly beautiful. We stopped at Miena on the banks of the Great Lake. It had a caravan park, a small bar and a convenience store and a spectacular view. Tassie is full of interesting little villages surrounded by world class unspoilt views.

Jacky’s Marsh is a locale, The Roundhouse was the place we had booked on Airbnb. From their blurb on Airbnb;

The Roundhouse is full of architectural features. From the handmade stonewall basement, through the curved wooden features of the main floor, to the onion top cupola that caps off the building. It is a truly unique property that continues to create special memories for all who visit.

It turned out to be an extremely interesting building in the middle of a rainforest overlooking the dubiously named Quamby Bluff. A self build project by Kim the owner who is a director or a producer or something in music and has a studio in his place and built this for the musicians to stay in when recording. The building was round, the rooms therefore ended up like a pizza slice. The silence of the location was a blow to the senses. Jenni, Becky and I took in the views from the balcony in the morning while having our morning cuppa. But, despite the tranquility, the views and the unique building my overriding memory of this Tassie experience was the 3 of us curled up on the sofa watching “The Castle” on video. 2 of us for the very first time. The Roundhouse blurb was spot on, that ‘special memory’ goes straight to the pool room.

It was nearly time for Becky to fly home but before she went we had a few more experiences. In the Bay of Fires vineyard in the Tamar Valley in north east Tassie we had lunch after exploring this region a bit. The lunch was delicious but the star attraction was the Cardonnay. Superb, Tasmanian whites are pretty damned good.

Then we visited Launceston and Cataract Gorge. Those of you reading this blog will have already been aware that Jenni doesn’t like heights so it was just Becky and I on the chairlift that day. Luckily Jenni was able to take this pic of us on the way back down. 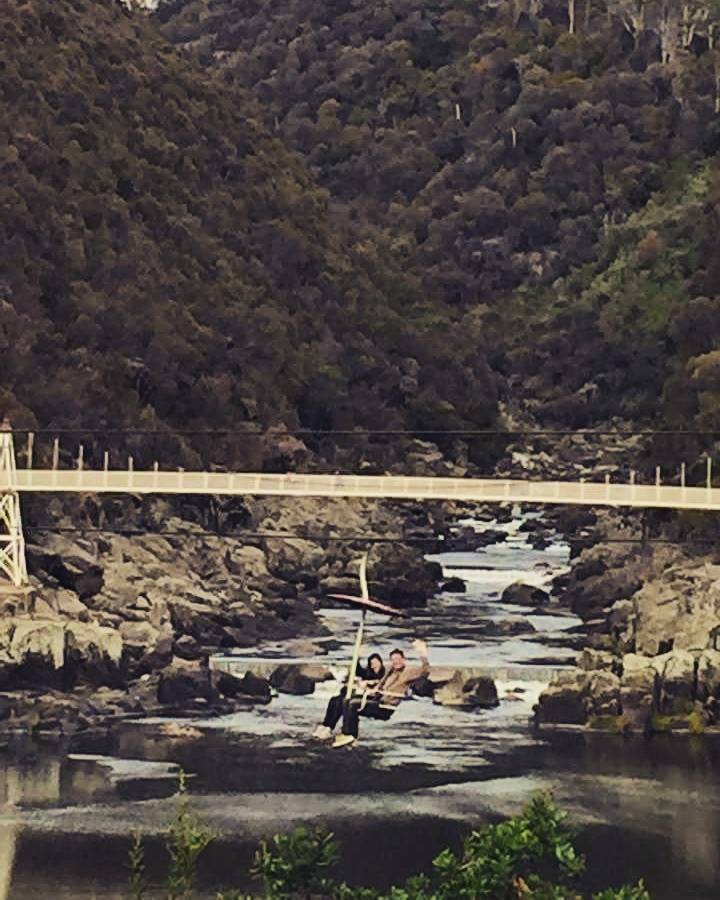 Shortly after this and after a drink in Launceston we said goodbye to Becky, put her into a taxi to the airport and walked the short distance to and old convent named Audlington which was to be our accommodation for the night.

Our next destination was Stanley on the North West corner of the island. On the way we stopped at Spreyton Cider where I tasted a few brews and and was told the story of why there are so many  cider makers in Tassie. Tasmania has always been a good place to growing apples and once exported over 90% of its apples to the UK for them to make cider and for Australia to import back again. Then Britain joined the EU and overnight swapped Australian apples for their erstwhile EU chums produce. So Tasmanian fruit growers, stuck with tons of the stuff decided to make their own cider, and a fantastic job they are doing.  Spreyton cider was great, tasted quite a few. Jenni drove us to Stanley after that. 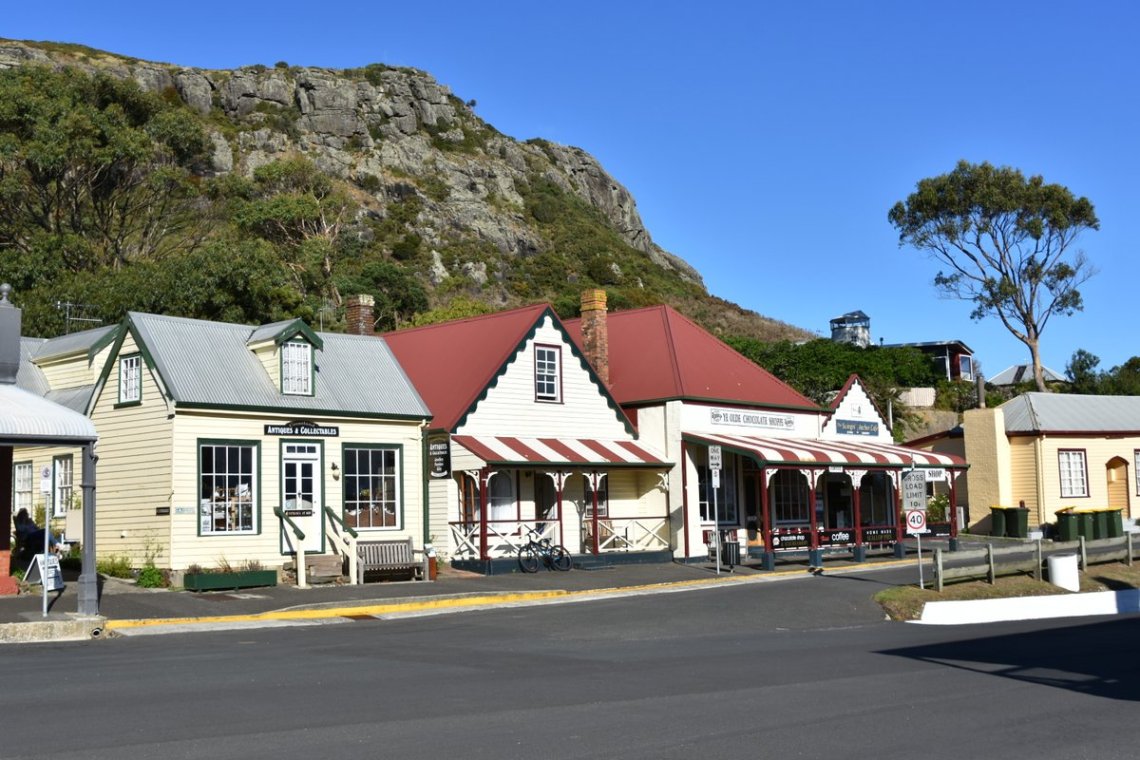 Stanley is a delightful little village with a population of less than 500. Tourism and fishing is it’s main income. It was used as the town in the period film, “The Light Between Oceans” and it seems apart from taking the cars off the streets they didn’t need to do a lot to it. We had very good lobster in the famous Hursey Seafood restaurant. Its surrounded by scenery, good scenery, nice scenery, Tassie scenery, I’ve run out of superlatives! Verdant rainforests, rolling plains, mountains, lakes and rivers were all there a short drive away. We went for an explore and it was a feast for the eyes. 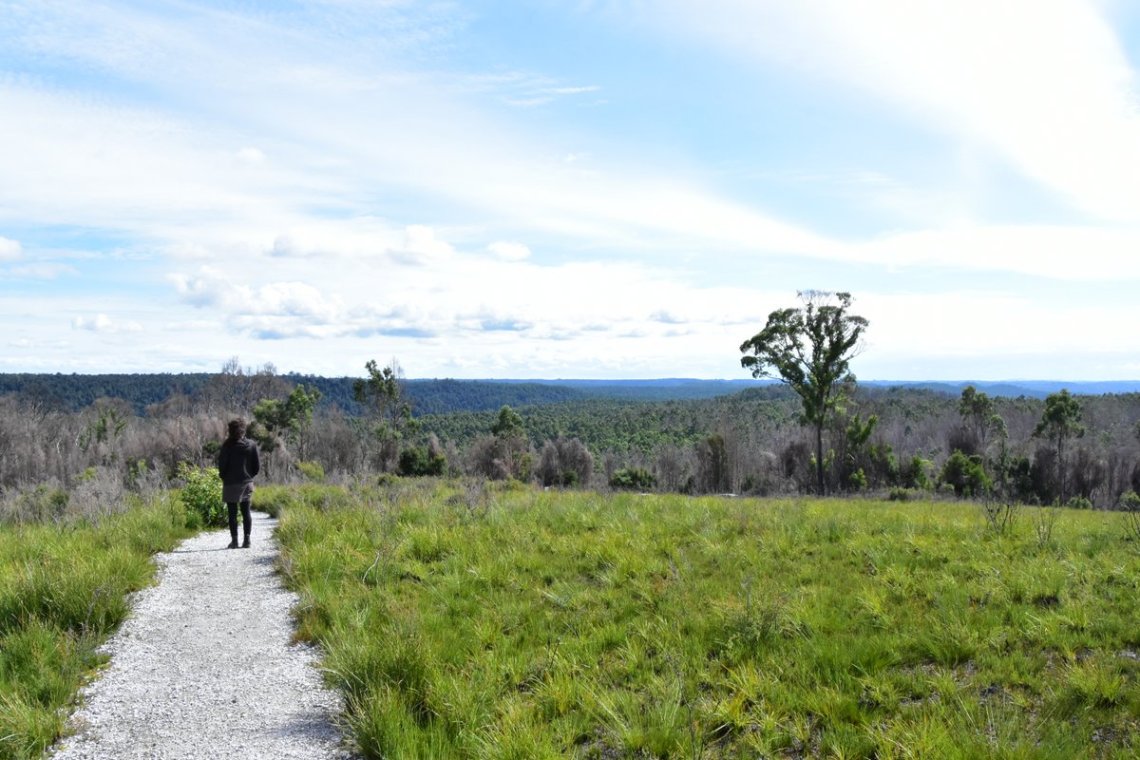 Reluctantly we left beautiful Stanley, it has left us with a strong desire to return and spend some more time there. It is a beautiful, tranquil place. Next destination, Meander Happy Chook Farm Mole Creek….